Firstly, I hope you had a fantastic Christmas and your NYE celebrations exceeded your expectations.
One thing I enjoy about this time of the year is sitting back and watching TV. This year, I was overjoyed the BBC broadcast “Mystify – Michael Hutchence”.
If you haven’t seen it yet and get an opportunity to do so, please watch this documentary. It is an amazing insight, capturing the essence of what made Michael Hutchence such an enigmatic artist. I’ve read numerous books and seen many documentaries and TV programs about him, however, this is one of the best I’ve seen. Whilst Hutch led a colourful life, for me this documentary shows what an incredible singer he was. This fact often gets overlooked.

This documentary got me thinking (as opposed to scoffing pringles, chocolates and cake!!) that without Michael Hutchence and INXS I would not have discovered Rock’n’Roll, singing or songwriting.

It was Jan 17th 1986, I was a 15-year old boy when I saw INXS performing ‘This Time‘ live on a UK program called “The Tube” on Channel 4.
My World literally stopped as I watched and listened in awe to Michael Hutchence, Kirk Pengilly, Tim Farris, Andrew Farris, Jon Farris and Garry Gary Beers. It  changed my life. I’d never seen anything like it, they sounded and looked incredible, total rock stars. Michael Hutchence was simply the coolest person I had ever seen. I was totally star struck.
After nearly 34 years I found this performance on YouTube!!! I became quite emotional watching it again.

Here’s a link to the entire performance.

Watching this again, the feelings of amazement returned, and man, they still sound great and seriously tight. Hutch doesn’t drop a note!!
INXS fused rock and funk in a way I’d never heard before. I was stunned as I watched Kirk Pengilly rip a guitar solo during ‘The Original Sin‘ then effortlessly, swung the guitar behind his back and started playing sax!!! Floored!!
You can see the band love and believed in their music and, as for Michael Hutchence, well his voice was like something I had never heard.

In 1987, the UK only had 4 TV channels and a handful of radio stations. I listened to Radio 1 when my mother would allow me!! It was too noisy for her, she was devoted Radio 2 fan – a station for old people I thought!! How things change!!

INXS weren’t played on the radio as they’d not broken into the UK Top 40 despite breaking the US. How on Earth was I going to get to listen to their music?

I didn’t have any blank VHS video cassettes to record INXS on The Tube, so, was unable to record it on the Family’s Ferguson Video Star recorder (pictured below). 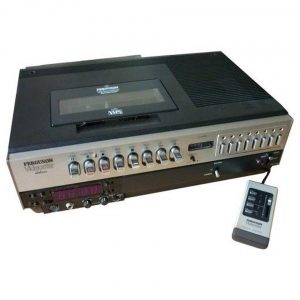 I did however, use this incredible machine to record INXS perform a show in front of Prince Charles and Princess Diana in Melbourne, Australia. Once again, thanks to the wonderful power of the Internet, I’m able to share a link for you to enjoy the opening track…

It’s funny, I nearly wore out the cassette watching the performance time and time again. The opening song ‘Burn For You‘ – Fucking Hell – incredible!!! The keyboard based introduction was like nothing I’d ever heard, so atmospheric!! Along with the crowd, I was captivated as the stage lit up on the first 3 beats of Jon Farris’s bass drum to reveal Hutch in a black leather jacket arms aloft over a black vest with “Watch the World Argue” emblazoned on it. He seemed to glide across the stage. You could not take your eyes off him…and that voice!!!
Throw into the mix Tim Farris who was now playing keyboards as opposed to guitar!!! My mind was blown!! I’d never seen anything quite like it – guitar and keyboards!! Too much for this impressionable 15 year old!
The entire show was electric and I distinctly remember the final song ‘Don’t Change‘ which, after one listen, was in my head forever!! I was hooked!!

I pulled together all my money and visited Spillers Records in Cardiff (the oldest record store in the World – http://spillersrecords.com/ ) and bought “Listen Like Thieves”.
The album had a gatefold cover with lyrics on the inner sleeve. I spent hours listening to this record, reading the cover, learning the words and looking at the artwork. My life had taken a turn and there was no going back.

I noted, however, that some of the stand out songs from the show in Melbourne were not on my new record!! There must be more INXS records and I needed to hear them.
Now these were pre-internet days!! No mobile phones!! How did we survive?!!

I went to Spillers, Our Price Records and HMV to see if there were any other INXS records…Sadly none were on sale.
So one day, I bravely asked one of the assistants behind the counter if there were any INXS records other than “Listen Like Thieves”.
If you’ve read the Nick Hornby book “High Fidelity” or even watched the film, you will understand, it takes courage to approach the Cool Cats behind the counter in a record shop to ask any kind of question. My credibility was at stake here, a question about the wrong band and I could be laughed out of the shop!!!

Thankfully I spoke to Chris, who kindly took me under his wing!!!
Chris Rees, managed the Blues and Roots Department of Spillers Records. He was also the lead singer and harmonica player in the infamous Cardiff Blues band “Snatch it Back” and went on to become my friend and music mentor.

Anyway, Chris took the time to get out an enormous red book called the “Music Week Directory” which listed musical artists and their discography…
OMG!!! INXS had released 2 further albums “The Swing” and “Shabooh Shoobah” in the UK and, this God of Encyclopaedic Knowledge behind the counter, also informed me there were a further 2 records “Underneath The Colours” and “INXS” had released in Australia which he could order on import for me!!!!!

The only money I had was from working in a butcher’s stall on a Saturday in Cardiff Market. Eventually, I saved up enough to put down a deposit to order “The Swing” which arrived a few weeks later. A few months afterwards I also got “Shabooh Shoobah”.

As time went by I became a regular in Spillers records and got to know the Cool Cats and eventually plucked up the Courage to ask for a Saturday job…and, like the Man from Delmonte, they said YES!!! So at 16, I became one of the Cool Cats behind the Counter at Spillers Records on Saturdays and in college holidays.

I then went on to order the remaining INXS Australian releases. At that time Spillers used to run trips to concerts all over the UK. In December 1987 to promote the release of “Kick” they played Bristol Colston Hall and I managed to get 2 x tickets with free concert travel!!!
‘New Sensation‘ was yet to break into the UK Charts so the Show wasn’t a sell out. It was however incredible. Support came from an up and coming Irish singer called Sinead O’Connor who was pretty cool.
INXS opened with ‘Kick‘ and played a storming set. My main memory is Michael Hutchence’s charismatic interaction with the crowd. It was as if he was having a ‘one x one’ (if you’re an INXS fan you’ll see what I did then!!) with each and every one of us.

Anyway ‘New Sensation‘ broke INXS in the UK and the rest is history. I saw them again at the Birmingham NEC the following year in the same week as I saw Daryl Hall and John Oates and Paul Young at The Newport Centre. Despite being amongst greatness, Michael Hutchence was the best singer for me that week!!

That Christmas I was bought the video of “Kick” which had all the videos to the singles combined with behind the scenes footage. It was my favourite present, ‘Never Tear Us Apart‘ is  still one of my all time favourite songs and videos. The band and Prague look fantastic.

So, Chris Rees eventually fixed me up with my first ever band “Backstreet” – an old School Rhythm and Blues Band led by the legendary Welsh guitarist Glynn Knight.
Glynn was one of Wales’ most respected Guitarists, an incredible player and a wonderful man. Despite being 20 years older treated me like an equal. I’ll always be indebted to him. He introduced me to Jimi Hendrix, Steve Ray Vaughn, ZZ Top, Ray Charles, Sam and Dave, Mark Bolan and Led Zeppelin and so much more.. We hit the South Wales live music scene hard playing 4+ gigs a week and the rest as, they say, is history…

Yep, thats me….my hair hasn’t always been as colourful as it is today!!!

So I conclude with my initial observation – by watching INXS on the “The Tube” on Friday 17th January 1987, the pathway to a life in music began. I blame Michael Hutchence, Kirk Pengilly and the Farris Brothers for my journey and I will be eternally grateful and thankful for the music, the inspiration and for whatever comes next.

Oh by the way – I covered “Good Times” on my “My Truths”. We had a ball recording it and love playing it live! Take a listen… 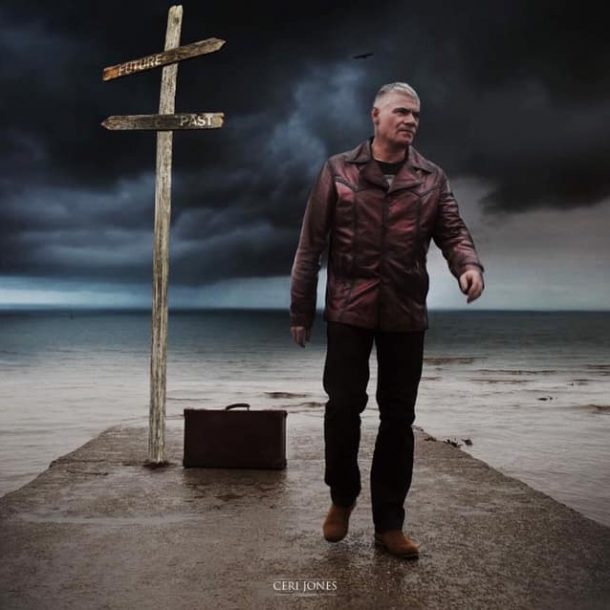 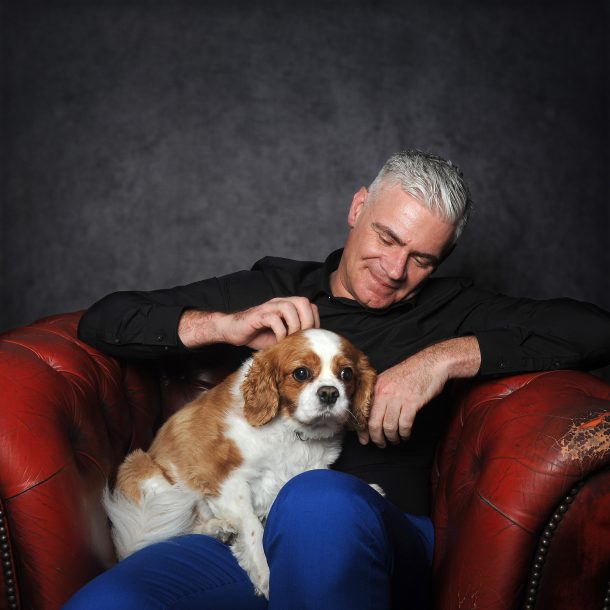