On Monday 30th December 2019, my darling Daisy, my companion of the last 10+ years passed over.

I’d never had a pet before and only bought Daisy as a puppy in an attempt to save my marriage. “Let’s do things as family” I’d plea. Well, everyone loves a puppy yeh? It worked!! You can never underestimate the power of love that a puppy brings.

I remember vividly the high pitched puppy barking noise coming from downstairs, as my 6 year old daughter and wife pushed me out of the way, as they ran downstairs to answer what resulted in a cry for help as our new young pup had, somehow, managed to trap herself behind the fridge freezer in our kitchen. 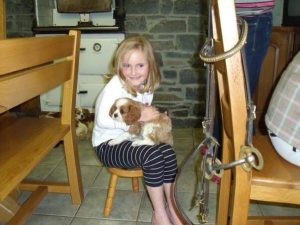 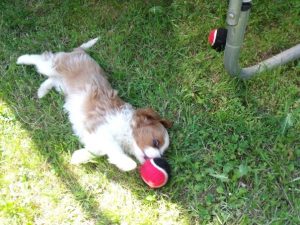 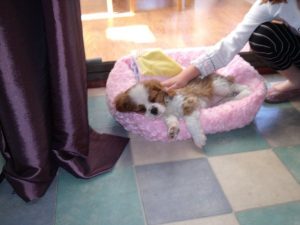 Daisy was a beautiful puppy, a King Charles Blenheim Spaniel. When we first saw her, she got so excited she wet herself!! However, she was house trained in no time at all.

The novelty of going out for family walks with our new puppy soon wore off as I became ‘Chief pooper scooper’ and before long it was just Daisy and I going for walks. Daisy, failed to save the marriage, as my ex wife left in the Spring of 2010, and the loveable dog became my sole responsibility.

Daisy gave so much impartial love during the deterioration of doomed marriage. She brought light into a very dark time

Daisy received the love and affection of my daughter until she hit 13 when she left to live with her mother.

When I opened a new Freight Forwarding business in South Wales she joined me and was happy to sit in the corner all day. She would enchant everyone who set eyes on her. 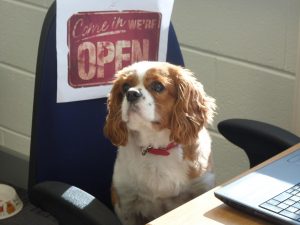 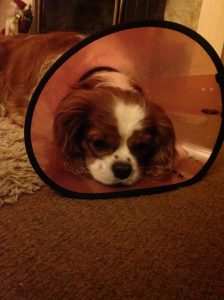 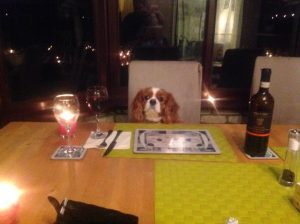 We shared 10 Christmas’ and just as I fell in love, she decided she to leave me because she was diagnosed with inoperable mouth cancer in November.

Hearing the diagnosis left me numb, although subconsciously, I already knew.

Somehow, I managed to ask how long did she have and was told a few months. 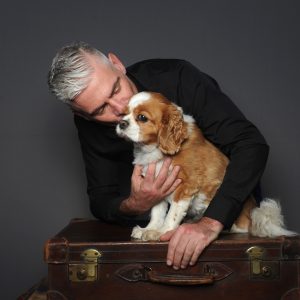 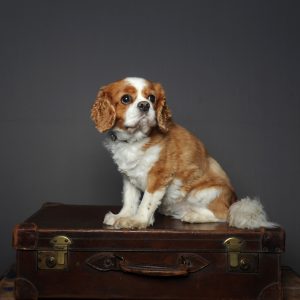 As I started to write this, 3 days after her passing, I have tears streaming down my cheeks. I can’t begin to tell you how much it hurts. I never thought it would hurt this much. My mother did because mothers know everything!! I remember her discussing with an ex girlfriend around 5 years ago, how much she worried about how I would react when Daisy passed.I joked about this, accusing my mother of doing a “Donny Darko” saying she should focus on today. Which is how I, eventually, learnt to live my life.  Oh the irony!!

I left the vets following the diagnosis and drove directly to my parents where, as soon as I arrived, broke down like a child in my mothers arms, sobbing uncontrollably. I couldn’t get the words out, however, my mother knew.

As I was comforted, I was reassured that Daisy gave me 10 years of love, she wasn’t in pain and had a wonderful life where she was loved every day.

This is something that should be celebrated – Subconscious Bank!

Those words resonated, as a songwriter I made a promise that I would only ever write songs that were real…an idea started to form.

So, I did what I have done for the last 3½ years and used my pain to create something positive.

I wanted Daisy to enjoy the rest of her life and believe me she did!! I made it my mission to write a song about her.

I’ve been recording new material at Shabbey Road Studios with Al Steele. He joked at one of our sessions, a week before the diagnosis, we should write a country song backwards so that it had a happy ending. Subconscious Bank! 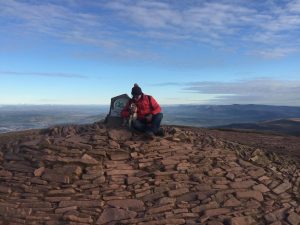 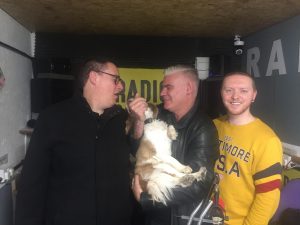 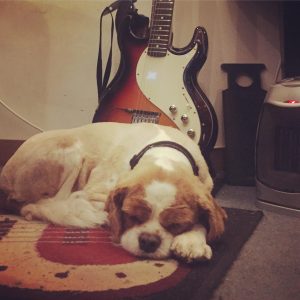 I shared my idea with Al, who was, as usual 100% supportive. I said I wanted the song to be a celebration of her life and create something that will live forever and bring joy. I tried a number of times to come up with lyrics or a melody and nothing happened.

Then, one night after a show, my girlfriend Nicola sat with Daisy, who once again, by simply just looking at her, melted her heart. As she held her gently, she told me Daisy knew it was her time and I heard her promise that she would look after me.

Again, as I write this, I’m overcome with another wave of emotion, as this has moved me to tears. Shit, It’s been relentless!! 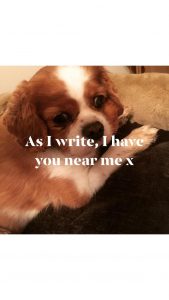 So, 2 days after the show, as Daisy sat on my lap in my front room, the melody line and verse came to me. Not long after came the chorus and a basis for the song structure.

I then rushed to my girlfriend’s home to show her the song, adding I needed a middle 8, when she told me Daisy spirit will run free when she passes.. “keep talking!!” I said, as I wrote this down along with a transcript on how spirits live forever. I now had my middle 8!!

Initially, I thought the song would be slow and reflective, however, the mood was positive, a celebration.

I still needed to be honest and sing about the hurt I felt, however, I want the song to be a reference point for others in the same position and use this pain as a source for positive energy.

I was once told, “never get a dog because they will die and it will hurt you”. Whilst this is true, I chose to be optimistic and celebrate a life of love and joy.

Whilst pragmatically this advice is sound, at present, the pain I’m feeling is so much stronger than reflective joy, however, I’m sure in time this will change.

On dealing with the loss of Daisy, it took me 4 days to pluck enough courage to spend the day and night at the home we shared. The memories are everywhere, the chair where she sat and cwtched (outside Wales cuddled) into me. Even as I write this, I’m unable to relax in my chair like I used too!

The towel I used to wipe her with after a wet walk, her food, the treats, the endless supply of pooh bags in every jacket and pair of jeans. These were all trigger points for tears.

Even, as I drive my car, I look at the passenger seat where she used to lie and stare at me. My journeys will never be the same now.

My friend’s dog Prince used to spend lots of time with Daisy and every time I used to go to the kitchen, I would be followed by both of them, as they’d stare at me and then look toward the treats box. This was an age-old Daisy trick, however, Prince soon caught on. They were a prolific double act, as you can see from the below photo which was taken a few days before Daisy passed over. 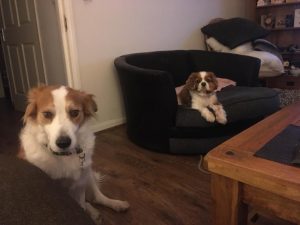 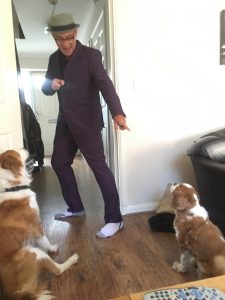 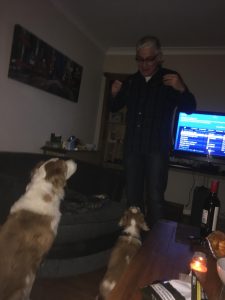 I rehearsed the song today, along with some other new material and I literally, cried all the way through it. I hope I can overcome this, in order to play it live as at my shows, I talk about the lyrical content and inspiration for my songs. I’m going to struggle with this one!!

The song is probably the most country I’ve written. I love the banjo lick and it’s most definitely still our sound.

I’ve a group of trusted friends who offer honest, some times brutal, critique and my country friends have told me this will be well received. I certainly hope so.

So here’s the song. I hope you like it!! It’s also available on iTunes, Amazon, Google Play, Spotify, etc….

Now, those who’ve followed me for a while, will note Daisy appeared on the cover of “My Truths”. Ceri Jones, who took the photos came up with the idea as a joke and well, she stole the show!

I wanted Daisy to be the star of the video and she most definitely is.

I’m really grateful to Ceri Darknell from E Spot for putting this together so quickly. When I approached her to do this, I thought we would have more time – sadly this wasn’t the case.

Daisy was also actually at each of the recording sessions for the single and video, where you will see her in the very last scene. How poignant.

A few days ago, 21st January, we scattered Daisy’s ashes at Thompson Park in Cardiff, where she used to obsessively chase squirrels.  Whilst doing this, through tears, I finally said goodbye and told her to take care.

I underestimated how hard losing her was going to be.  It’ll soon be a month since she passed, yet I could cry at a drop of a hat. She brought me so much love and joy, she gave me so much care and affection and I know she had a happy life. I’ll never forget her and miss her so much.

Thank you for the last 10 Years Daisy x 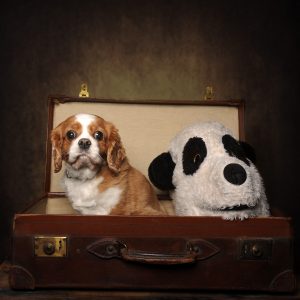 Beautiful blog. Very full of raw pain and beautiful sentiment. I know how it hurts as we lost our beloved Summer also a Blenheim to anal gland cancer (second cavalier out of four that we have to this aggressive form of cancer) in December 2018. She was only 9 and the tumour was inoperable so we found out in the late November and had 4 weeks wit her. It shattered my husband and I when we lost her but we had 4 other dogs that helped us fight through the pain. It never goes away but does become more manageable although sudden rushes of emotion and pain will strike like lightening especially when we are doing something that she used to love. Funnily enough the worst times are when the spec savers adverts and the flash adverts come on TV as she used to bark madly at the dogs on there. She even recognised the tunes so if she was in the kitchen she would cone running barking away. Your song is beautiful and Daisy was gorgeous. I hope the pain eases. Love from my family to your family. ❤️❤️❤️❤️❤️❤️

I absolutely understand your grief. My pups have been there through all the good and bad. For me, getting another pup asap keeps the depression at bay. I look at it this way. How do I want them waiting for me in Heaven? Do I want them to be alone, being sad, waitjng forbonly me or do I want them getting loved up on by my Dad and uncles and happy when they see me agsin. I know their love for me only wants the same for me. Your tribute to Daisy is amazing. You were lucky the ex left her behind. Good luck.

I feel your pain. Your story is very similar to mine, we lost Rosie aged 11 last July to cancer of the mouth. I miss my little soulmate every second of every day. Thinking of you and Daisy xx

Beautiful so beautiful. I’m in tears. My heart breaks for you. I have a 14+ year old, a 12 year old and a 5 1/2 year old. I’ve lost several before and it’s never easy. The pain is unbearable. Such a beautiful
Tribute to Daisy as I sit here bawling my eyes out😘 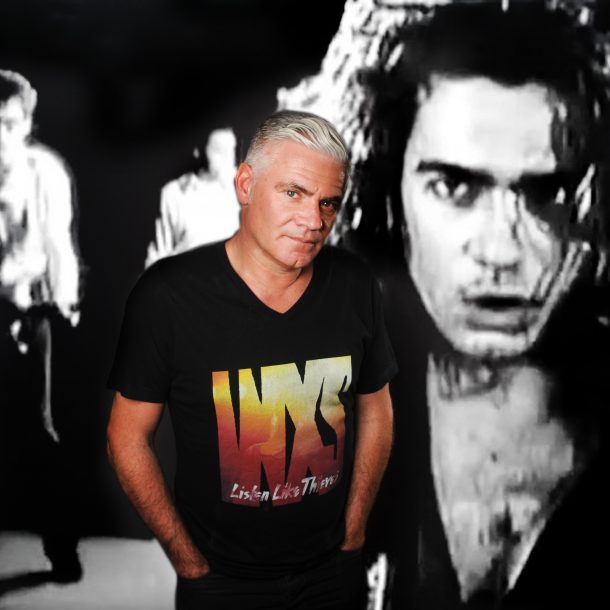 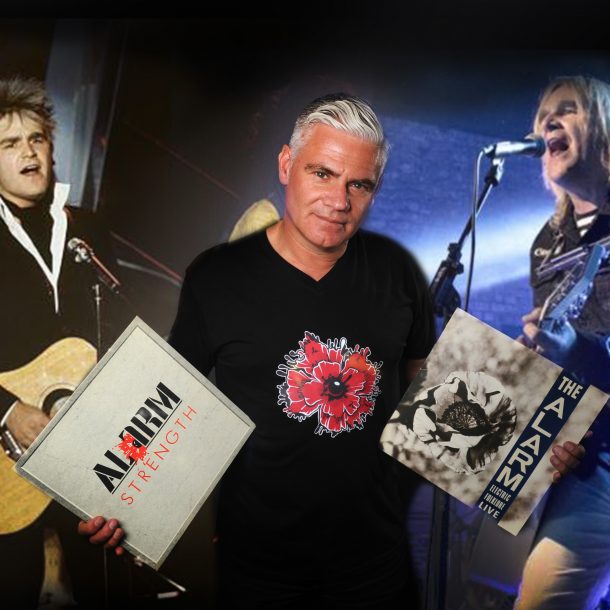